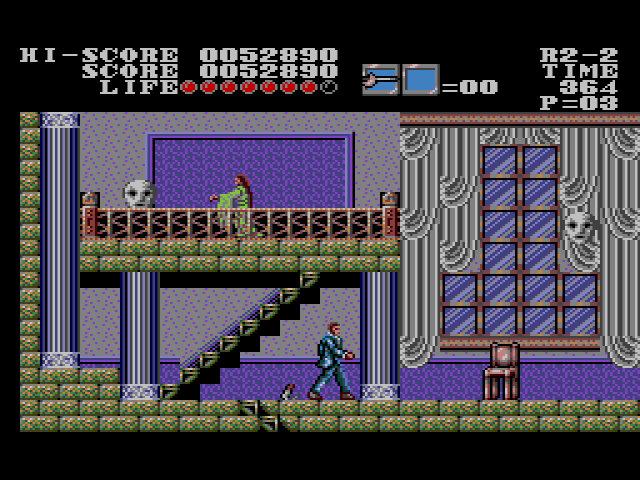 Let’s get this out of the way early on: Master of Darkness is possibly the most blatant clone of the Castlevania series you are ever likely to come across. It is shameless in just how much it imitates the mechanics of the first Castlevania game for the NES, and being honest, as a Master System owner in the early 1990s, I didn’t much care. Castlevania was a game I could only play if I bought a NES (something I wasn’t going to do at the time, being a massive Sega fanboy), so the chance to play a game that was for all intents and purposes an exact clone of that… well, I wasn’t going to quibble.

So, the plot: Dr Ferdinand Social (awful name, isn’t it?) must battle through a number of stages, defeating various monsters and minions along the way, before he can find and defeat Dracula, thus saving the world. Simple, direct, and very effective. Literally, that is all you need to know. Defeat Dracula, save the world. No unnecessary exposition, or plot twists. This was 8bit gaming at its most direct.

The game itself is an action platformer, just like Castlevania. You move through the scrolling levels, using various weapons you collect from the weird floating masks, killing the enemies (bats, zombies, vampire women, etc) as you go, gradually getting closer to your ultimate foe. And it plays really well. The controls are pretty tight, meaning any deaths you encounter from the various environmental hazards (mostly pits) are down to your playing, not the game itself. The difficulty curve isn’t too steep, although novices may take a few attempts to finish the game. Sound is probably as good as can be expected from the Master System, with music playing throughout. The games graphics are pretty damned good, as you would expect from a late period SMS title, being colourful and clear, with decent animation.

Overall, this is a fun little game, with some nicely imagined atmosphere.

Robb
20th October 201920th October 2019
The problem with Gatekeepers The retrogaming community is for the most part a wonderful, open, welcoming place. You see people...

Robb
18th November 201818th November 2018
Ah, Tetris. Quite possibly the most perfect videogame yet devised. Tetris is easy to pick up and learn, yet difficult...
Robb Hitchen
16th February 201427th July 2018
To tell the truth, I'd actually forgotten about this blog! Terrible, I know, but life has been so busy over...
Robb Hitchen
20th December 201227th July 2018
Given that we are just days away from another Xmas holiday, I thought I'd share some of my finest Xmas...

Robb Hitchen
2nd September 201227th July 2018
I have to admit, I was never that impressed with the PSP when it was announced. Sure, it was clearly...