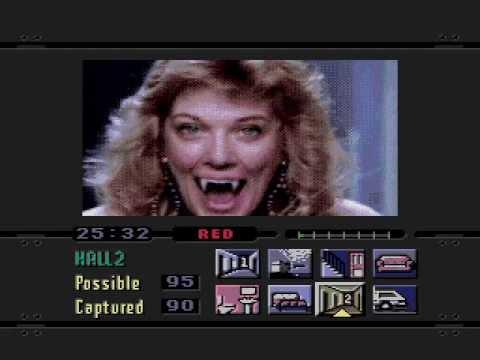 The early 1990s was an amazing time to be a gamer. Nintendo and Sega were going head-to-head with their 16bit consoles, in a “war” for the hearts and minds of teenage boys. Nintendo had their reputation for “reliability” and high production values, but Sega were “edgy” and “cool”. Sega dove headlong into new technologies, with the introduction of the Mega CD/Sega CD (depending on where you were in the world). And it was this piece of hardware that introduced me to the wonder that was full motion video (or FMV for short).

A tiny bit of history

Back when Sega launched their CD based add on for the Megadrive, CD ROM games were a relative rarity. Sure, CD ROM drives were available for IBM PCs, but they were expensive and support was still limited. Sega hoped to crack a new market, leveraging the enhanced capabilities of CD ROM technology to leave Nintendo in the dust. And how would they achieve this? Well, the early marketing leaned heavily towards the new technologies ability to display “Full Motion Video”, giving us gamers something that approximated the look and feel of a Hollywood movie. Kind of.

Now, the quality of the FMV games released back then on the Mega CD (and, indeed early PC CD ROMs) to our eyes now looks atrocious. But back then, they were mind blowing to a 13 year old kid who just 3 years earlier had been playing on his ZX Spectrum. This was actual, real film footage. Of actual actors! And YOU were in CONTROL! Of course, this “new age” of “interactive movies” never lived up to they hype, but my gods, did it enthuse many of us.

When Sega launched the Mega CD, certain games featured heavily in the hype. A VHS cassette was given away with select magazines (I think I got my copy from Mean Machines Sega), which featured a hype promo for the new system. And it was loaded with FMV titles. Sewer Shark. Make My Video with Kriss Kross and Inxs. And of course, the legendary Night Trap. As was noted earlier, the quality of the video in these titles was somewhat poor, even compared to VHS, but at the time… mind = blown.

Sure, some commentators did mention the limited colours, and graininess, but generally speaking, most people were really rather impressed. Now, hindsight gives us a chance to see the (obvious) flaws in these early games. The video window itself was often painfully small, taking up maybe a quarter of the screen. The colour depth was so low as to be borderline monochrome at times (especially in Sewer Shark). and the frame rate was just barely acceptable (roughly 15-20fps). But the technical achievement can’t be ignored.

And I fell in love with these games. At the time, my love affair with all things film was just beginning to really burgeon. Alongside a love of technology and videogames, and it was a perfect storm for me. I could look past the often basic gameplay, and see something “beautiful”. This was a marriage of technology and film that felt like the future.

Now, I say basic gameplay, and in many cases it was. But some games are, in my opinion, unfairly maligned. Night Trap being my main example. Sure, the basics are, well, basic. jump to a room, activate a trap at the right time, rinse and repeat. But the skill in navigating the rooms at the right time to trap the enemies, keep up to date with the story, and stay one step ahead of the games ultimate villains was as complex a task as many platform games which dominated the scene at the time. And it’s follow up Double Switch was similar.

By the time the second tranche of games arrived, the technology behind the FMV had been improved somewhat. Games such as Double Switch, Tomcat Alley, and Ground Zero Texas benefitted from a better understanding of what the hardware could do. This mostly meant better compression techniques.

These later games used Segas “TruMotion” video technology, which allowed for larger video windows, and slightly higher colour depth. Alongside increased budgets (Ground Zero Texas was rumoured to have been the most expensive videogame ever produced at the time), games and Hollywood moved ever closer. And despite the nay-sayers, even as the 32bit generation got underway, FMV games stayed around. Night Trap was ported to a number of more powerful systems, looking better with each iteration. Indeed, even major franchises such as The X Files went down the FMV route.

And now, FMV games are having a bit of a renaissance. The Bunker proved to be a surprise hit when released. And both Night Trap and Double Switch have had remastered editions in recent years. FMV games may have died off, but they still inform the games you play today. Cut scenes? That’s part of their legacy. Film style scripts? FMV games again. And I love them for it.