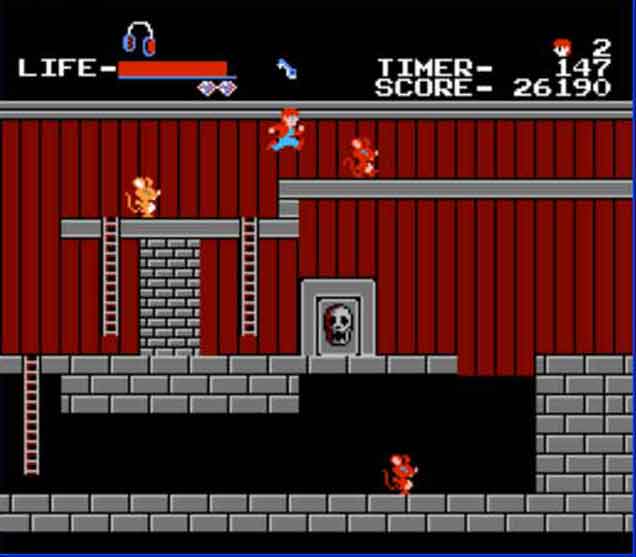 The first time I came across this game was in the early 1990s, when I purchased a ‘famiclone’ called the Scorpion 8 from my local video rental shop. There were 2 reasons I picked this game up: firstly I’d never heard of it before and secondly, it was the only game on the shelf with an english language title.

And I’m glad I did. The Goonies turned out to be a reasonably playable little platformer. The game sees you traversing a map which spans locations from the Fratellis hideout to One Eyed Willies galleon, rescuing your friends, and avoiding enemies along the way. Each stage (excluding the hideout and the Galleon) is a bit ‘Metroid-esque’, in that they are not traditional ‘linear’ scrolling levels. You have to travel back and forth, accessing different sections of each stage to find all your friends, and the required exit keys.

The game itself plays quite well, with responsive controls. Unlike many platformers of this era, the controls don’t feel floaty or loose. Looks wise, the game is acceptable. It certainly does not push the NES in any way, shape or form, but remains pleasing on they eyes. Sonically, the game is ok. A nice rendition of Cyndi Laupers Goonies theme is rendered throughout most of the game, with some basic sound effects for certain actions as required.

I have a deep affection for this game, and the only criticism I can lay at its feet is that it is a bit short. A decent gamer should be able to rock through this title in under an hour, easily.