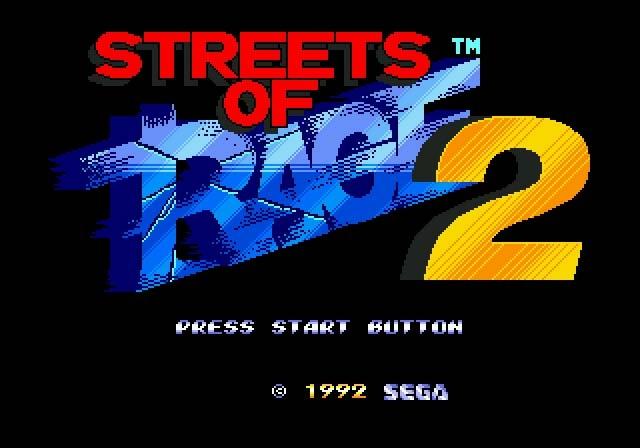 Before I start, I shall freely admit that I have a major bias for this game. SoR2 is my all time favorite videogame, bar none. The first time I downloaded an emulator, it was a Megadrive one and the first ROM was SoR2.

So, thta being siad, whats the game about? Well, as with most games of the 16bit era, the plot is fairly simple. Uber-villain Mr X has seemingly returned from the dead to claim the city as his own once more. For cops Axel and Blaze team up with ex pro wrestler Max and Skate, the kid brother of their now kidnapped best friend Adam to rid the streets of Mr Xs goons and free the city once more.

Like I said, pretty basic. The game itself is a side scrolling beat em up, taking place over numerous stages set in various locations, such as the titular streets, a bridge, a theme park etc. Every stage contains a boss and a sub-boss, plus a variety of regular foes to despatch. This is done by walking through the levels and punching the crap out of anything that moves. Each character has their own basic set of moves which generally suffice, but should the need arise, they also have 2 special moves which drain a portion of the players health to activate. And thats it. As videogames go, the basic mechanism of play is amongst the simplest imaginable.

And how does it play? Beautifully. This game is easily the pinnacle of the scrolling beat em up genre. It took the template laid down years before in Double Dragon, then refined in Final Fight, and distilled its essence even further. The difficulty curve was just about right (although the legendary Level 2 boss Jet could be a bit of a bastard first time around), and the game had a real ‘just one more go’ vibe. The fact that it looked amazing certainly helped, with huge, colourful, well animated sprites being thrown around the screen this was one 16bit title which truly looked like an arcade game in your bedroom, easily surpassing its predecessor, and pretty much every other beat em up on the market (including the SNES version of Final Fight) in terms of its visual beauty. And sonically it was no slouch either. A stunning Yuzo Koshiro soundtrack (which graces my iPod even today, despite my hatred of dance music), mixing typical videoga beats with the then current dance/house music sounds complimented the action perfectly. despite some stunning audio pieces such as this, the MegaDrive has a somewhat unfair reputaion amongst ‘retrogamers’ for its poor audio capabilities. Paly anyone who says so this games OST, and make them eat their words!

I honestly believe that everyone should give this game a whirl, either by emulation (leaglly of course…) or on the original hardware. A true collosus of a now almost dead genre, this will give you hours of pleasure as a gamer.