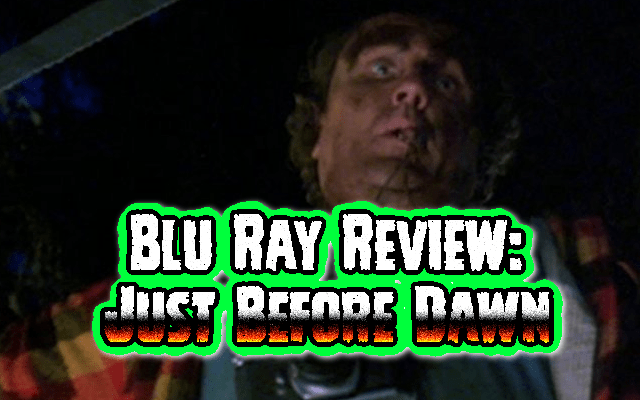 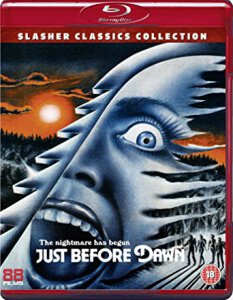 Just Before Dawn was made right around the same time as the slasher movie boom was just happening. In the wake of John Carpenters massively successful “Halloween”, it seemed that every single independent film producer was getting involved in the “teens in the woods getting slaughtered” business. “Just Before Dawn” is one of the better entries into this genre, and this release by 88 Films does it proud…

5 teenagers (or early 20-somethings) are headed into the Oregon wilderness to check out some land that one of them has come into possession of. Little do they know that a madman is lurking within the woods and valleys of the Pacific North West mountains. He is killing everyone he can with his enormous machete. Ignoring warnings from both the local wildlife ranger (played by the legendary George Kennedy), and a drunken local who was on the run from the killer, the youngsters head off in search of fun and adventure. But will they survive the trip?

And that is as much as you are getting. If I say anymore I’ll spoil the films big twist, which you may or may not figure out for yourself whilst watching.

Anyway, this is almost certainly the best this film has looked since the first prints were struck. Like many slasher films of the day, it was shot pretty much entirely on location. What this means is that despite the best efforts of the crew, some shots do display some variation in lighting. It does also mean, however, that an atmosphere of isolation is maintained pretty well throughout. And the location (a national park in Oregon) looks stunning and haunting at the same time. The trees are so dense you could easily believe that someone was there, hidden, watching you. Waiting. Being honest, it looks no better, or no worse than a myriad of similar films made at the time. Which means that it “feels” like it should. Audio is a pretty basic 2.0 stereo mix, which is again pretty standard.

The disc does contain a longer “international” cut of the film, but the print this is taken from is heavily scratched, so makes viewing it a curiosity you won’t view more than once.

The cast are all pretty good, acquitting themselves well. There is very little in the way of “wooden” or “hammy” acting (except perhaps from the killer). Indeed, they are far more watchable than the casts of many similar films, which makes a pleasant change.

Extras included on this disc are as follows: An  Audio Commentary with 2 critics. An and interview with the director Jeff Lieberman. A documentary about “Grindhouse” cinema. 2 trailers, and a photo archive of behind the scenes shots from the directors personal collection. The case also features a reversible sleeve featuring both new and original artwork.

Overall, this is a decent little slasher, and well worth tracking down, especially as you can get it for under £10.