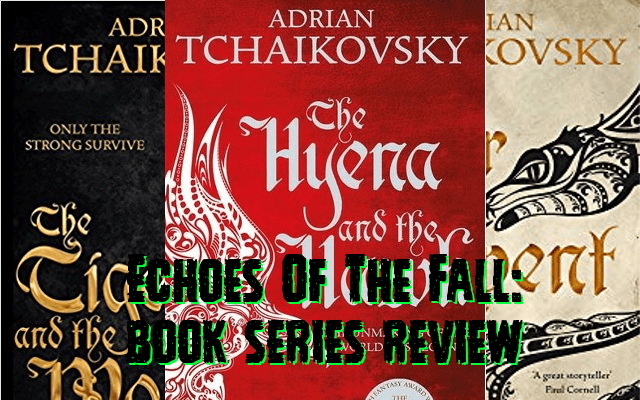 “Echoes of The Fall” is a 3 part series of fantasy novels by Arthur C. Clarke award winning author Adrian Tchaikovsky. But do they match the undoubted quality of the authors previous work (such as his “Shadows of The Apt” series, or the award winning “Children of Time)? Read on to find out…

The general storyline concerns a world where the inhabitants are able to take the shape of their tribes totemic God. These all are based on different animals, with the predominant ones being The Wolf, The Tiger, The Hyena, The Serpent, and The Bear. Each tribe has it’s “Champion”, who is capable of embodying the ultimate attributes of their chosen God.

Into this world, riven with inter tribal animosities, is thrust young Wolf tribe girl Maniye. Throughout the novels we follow her as she rises from being the unwanted child of her tribes chief, to saviour of all the humans. To do this, she must tame her dual nature (no spoilers here), and find a way to unite the tribes and defeat the mysterious “Plague People” from beyond the Sea.

As expected, Adrian Tchaikovsky works his magic in building the world of the tribes. He masterfully creates each tribe, and builds up a clear and believable history for them. And he vividly brings the world to life with his prose. Indeed, for my money, there are few, if any, fantasy authors active today who are as adept and skillful as Tchaikovsky when it comes to world building. Not for he are the standard fantasy tropes of “swords & sorcery”. His action and supernatural acts all have a solid, well thought out grounding.

And as I have come to expect, he once more builds his story around a well written female protagonist. Unlike many other authors who use female characters purely for “wish fulfillment”, Tchaikovsky crafts believable, flawed, human characters. Maniye is a brilliant example of the “Hero Journey”, told from a perspective few fantasy authors can manage.

Storywise, the overarching plot touches on a number of themes, such as prejudice, belief, war, love, and change. Indeed, the last one of these is probably the most important, as the story shows a world irrevocably changed, with no clear answer at the end as to whether this is for the better or not. Again, Tchaikovsky avoids another hackneyed old trope by refusing to cap the story off neatly with a “happy ever after” finale. Characters you come to like will die. Others you hate won’t. And I wouldn’t have it any other way.

The Echoes Of The Fall series ( The Tiger & The Wolf, The Bear & The Serpent, and The Hyena & The Hawk) is another excellent read from Tchaikovsky. If you enjoyed the Shadows of The Apt series, or generally like fantasy novels, then I cannot reccomend them heartily enough.