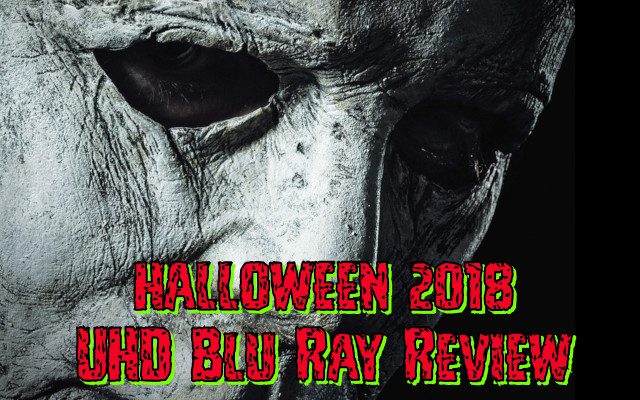 Halloween is the latest entry into the now 41 year old franchise. Now, since John Carpenters 1978 original, the series has been somewhat varied in terms of quality. But does this new entry redress the balance? Read on to find out…

It is 2018. 40 years have passed since the infamous “Babysitter Murders” in Haddonfield, Illinois. Ever since that Halloween night, Michael Myers has been kept securely locked away in Smiths Grove Sanitarium. And during that time, he hasn’t uttered a single sound. On the eve of Halloween, 2 investigative journalists visit Michael, and show him his mask. Meanwhile, in Haddonfield, the daughter and granddaughter of Laurie Strode live their normal lives. Laurie, meanwhile is a paranoid survivalist, suffering deep seated PTSD after what happened to her. So deep is her fear that Michael will return, she has become alienated from all her family. However, when Michael is being transferred to the states new facility, he engineers his escape, and once more returns to cut a bloody swathe across Haddonfield. Can Laurie convince her family that he is back, and manage to stop Michael once and for all?

1978s Halloween is an all time classic. Not just of horror cinema, but cinema in general. The film was masterfully made on a minute budget by John Carpenter and his team. The sequels (and remakes) however leave a lot to be desired. This fresh entry to the franchise quite literally throws out the events of every other Halloween film, bar the original. So no trip to the hospital. No cute kids destined to take Michaels place as the embodiment of pure evil. No ridiculous “Cult of Thorn”. And no fucking Busta Rhymes doing “kung fu”.

What we have instead is a thoroughly wonderful sequel which looks at how Laurie Strode coped with being the “final girl”, how it shaped her family, and how Michaels desire to kill her sat dormant. Now, the film hits all the expected beats: Michaels escape, his murderous rampage, the “devoted” doctor trying to stop him (or is he?), the fightback by our heroine, and the is he/isn’t he dead moment (although you have to wait until the credits have rolled for that one).

They films style apes John Carpenters at times, yet retains a fresh, contemporary feel. There is liberal use of steadicam work, and some beautifully framed shots. The production design is stunning, and belies the films rather small $15m budget. Sound design is simply superb, returning to the style created by Carpenter in his original. This means that the “jump” moments are scored as the event happens, with no foreshadowing (which often ruins any potential scares as you know they are coming). It helps that Carpenter returned to help produce the new score, which riffs on his original, without being a slavish copy.

And, unlike many contemporary horror films, this isn’t populated by low rent, low skill actors. Jamie Lee Curtis head up the cast, and boy is she good. Her 40 years older take on Laurie Strode is magnificent. She is both vulnerable and tough as hell, often within the same scene. And the rest of the cast (including the obligatory teens) all manage to produce high calibre performances.

So, I viewed this film in its UHD 4K Blu Ray format, and I have to say, it looked and sounded superb. The picture was crisp, and the dark scenes showed real contrast (especially with the HDR mode active on my TV). I’d go as far to say that some of the night time scenes are almost reference quality for a 4K master of a horror film.

The disc is let down though by the meagre extras. Barely 30 minutes long, they comprise of some EPK pieces, and some deleted & extended scenes. And that’s it. No commentary. No trailer. Nothing. Poor show, Universal, poor show.

Halloween is a superb film, let down only by a weak selection of extra material.