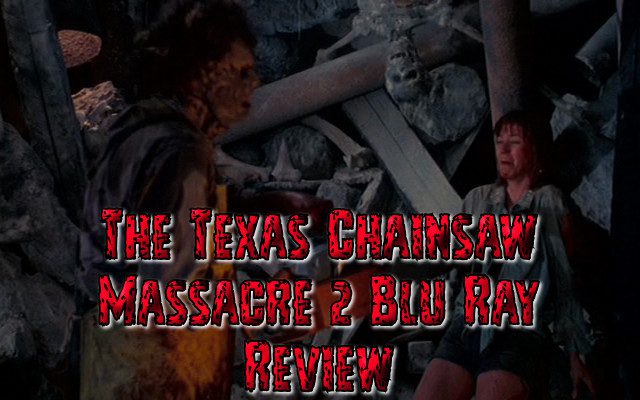 The Texas Chainsaw Massacre 2 is the somewhat belated sequel to Tobe Hoopers 1974 hit horror movie. Hooper returned to the franchise to direct this sequel, but does it meet the standards set by the original? Read on to find out, Fiends…

14 years have passed since the events of the original film. Despite the best efforts of the police, the Sawyer family were never found. Ever since, the state of Texas has officially denied the events of the first film ever took place. Despite this, similar occurrences of mass murder by chainsaw have happened all over the state. After 2 rowdy, drunken young men are murdered live on the radio, Sheriff “Lefty” Enright comes to investigate, aided by local DJ, Stretch.

After replaying the recording of the murders, Stretch is stalked and attacked by Leatherface and his brother, Chop-Top. Stretchs assistant, L.G. is brutally attacked and taken by the Sawyers. Leatherface refuses to kill Stretch, so she follows them to their lair at the abandoned Texas Battle Land theme park. Lefty has followed her, and the scene is set for the final showdown between the Sawyers, and their nemesis…

When compared to the tense, eerie original TCM, Part 2 is a definite downgrade. Loud, brash, and borderline vulgar, it is far more comic book than the original. Yet, taken on it’s own, and viewed as a black comedy, it stands on it’s own two feet quite well. Everything about the film is over the top. Dennis Hopper chews the scenery as Sherriff Enright. Bill Mosely is completely insane as Chop-Top, and Leatherface, as portrayed by Bill Johnson is a Looney Tunes-esque monster, loaded with impotent rage and childlike fury. Caroline Williams as DJ Stretch is the most “grounded” character in the film, but even she indulges in the films cartoony chaos come the end.

In many ways, the film could be seen as a parody of the then current trend for “Stalk & Slash” horror films. Everything is amped up to 11, from the gore, to the dialogue, to the sets & lighting. Hooper is clearly both having fun with his filmmaking, and poking fun at the expected conventions of the genre. He avoids some cliches (there is no nudity, for example), but amplifies others (the sexualised violence seen in many slasher films is pushed to parody levels during the radio station attack). The film also uses the Sawyer families cannibalism to comment on consumerism. Their chili is so popular in Texas, that they have to keep killing to keep being successful, far beyond what they did in the original film.

There are 2 versions of this set from Arrow Films available. 1 is a limited edition box set with an extra disc featuring a number of early works from Dennis Hopper. Sadly, I only possess the single disc edition. However, this is laden with some excellent extra features, as per usual from Arrow.

You get the following extras (many taken from the US release by MGM):

Optional English SDH subtitles for the deaf and hard of hearing.

Image quality on the disc is really rather good. The film was shot on 35mm, and the image, whilst somewhat grainy, is more than acceptable. Indeed, I’d say it hasn’t ever looked this good. A new 2k scan was used for this release (the same one as the US Scream Factory release, I believe). Audio is 2.0 stereo, and is nice and clear.

Overall, this is an excellent package, and well worth your money.

Buy from Amazon: TCM 2 at Amazon.co.uk