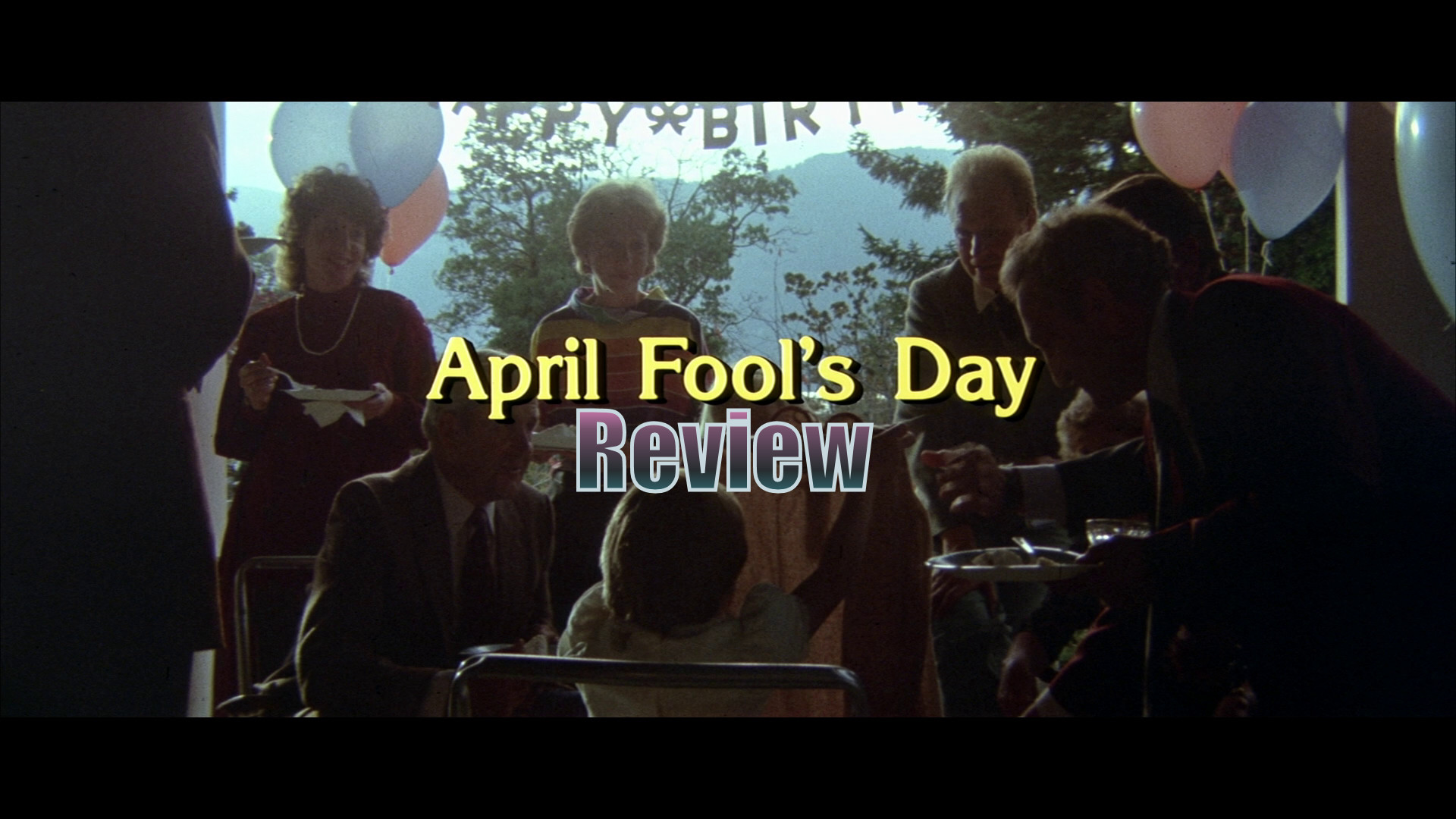 April Fool’s Day was released at the tail end of the “golden age” of slasher films. In 1986, Frank Mancuso Jr. was looking to break away from being the “Friday The 13th” guy, and this was one of his first projects. Surprisingly, we had reached 1986 without any other producers snapping up the name, despite pretty much every other named day being used for a slasher title. But what is April Fool’s Day all about? What is the films “hook” to draw audiences in? Well, read on to find out…

April Fool’s Day takes place over a weekend during Spring Break. Muffy (yes, that’s her name) has invited her friends to spend the weekend at her secluded family home. Located on an island in the middle of a lake, the house is accessible only by boat. And once the guests arrive, there isn’t another one until Monday. Joining Muffy are Harvey, Nikki, Rob, Skip, Nan, Chaz, Kit, and Arch. While Muffy prepares for their arrival, the gang play around on the boat, shooting videos of each other, and larking around. Tragedy strikes when one of the boats deckhands is gruesomely injured in an accident while docking. Brushing this off, the gang head to the house to begin their weekend of shenanigans and celebrations.

Upon their arrival, it is clear Muffy intends for this to be a fun weekend. Throughout the house, she has set up numerous pranks, such as collapsible chairs, whoopee cushions, etc. Alongside these lightweight gags though are a few darker, creepier ones. Notably heroin paraphernalia and a tape of a baby crying. Shortly thereafter, the gang begin to disappear, one by one, starting with Skip. Kit thinks he see’s Skips corpse, and the others begin to search for him. Arch & Nan are the next to vanish, and their dismembered remains are found in a well by Nikki after she falls in.

The remaining kids try to call for help, only to discover the telephone lines have been cut, leaving them abandoned until Monday morning. As the remaining kids vanish, or get murdered and discovered, Kit and Rob piece together the fact that Muffy has a homicidally insane twin sister, Buffy. This explains “Muffys” erratic behaviour during the weekend. Buffy attacks them with a butchers knife, and the couple become separated. Eventually, Kit flees to the large living room, where she finds everyone else alive and laughing. The twist? The entire weekend was a setup. Muffy is planning to run horror weekends for paying guests, and this was a trial run. With the help of a friend who worked in Hollywood she faked the murders & corpses. Everyone agrees this is a great idea, and celebrates to end the festivities.

Later, a drunk Muffy returns to her room and finds a Jack In The Box on her bed. When she activates it, Nan appears behind her and slits her throat. Except it’s another joke, and the knife & blood are fake. As we fade to black we see the Jack In The Box on it’s side, and it winks at the camera.

April Fool’s Day sits in a strange space. Whilst it is very much a 1980s slasher film, it also sits outside of the genre norms. The kills are largely bloodless and non violent when compared to it’s peers. And the overall tone is generally much lighter. Indeed, this could be seen as a “gateway” film for a younger audience not quite ready for the latest Friday The 13th or Halloween film.

That isn’t to say it isn’t a good film. Far from it. Unlike many of it’s peers, April Fool’s Day is a very well made piece of cinema. Firstly, it is really well shot. Few slasher films manage to rise above looking very basic and almost simplistic in their visuals. Here, we have well framed shots, and some nice camera work, making the film look significantly more expensive than it’s approximately $3m budget would usually allow. Experienced elmer Fred Walton handles the film with aplomb.

And then we have the fact that it is a well acted film. Amy Steel slides on over from the Friday the 13th franchise to star as Kit, and Back To The Future star Thomas F. Wilson (aka Biff/Bufford Tannen) adds some quality as Arch. Indeed, all of the actors here show some decent acting chops, and their performances feel a cut above the standard for the genre.

Sadly, whilst the film was a minor hit, it’s lighter, less violent tone put many horror fans off the film. This meant we never saw a sequel or any potentially similar styled films appear.

April Fool’s Day is a bloody enjoyable slasher. It hits all the right notes in terms of pacing and suspense, and is therefore damn entertaining. Gorehounds will be disappointed at the lack of arterial spray, but the film does not suffer for this in my opinion.

The film is available on Blu Ray and DVD in a number prof different editions. There is a bare bones UK DVD from Paramount (if you can find it), plus a superb US region A Blu Ray from Scream Factory. For those in the UK & Europe, there is a pretty good Spanish Blu Ray release which features a few nice extras, and dual language Spanish & English audio tracks.

(All taken from the Scream Factory release, click to enlarge)