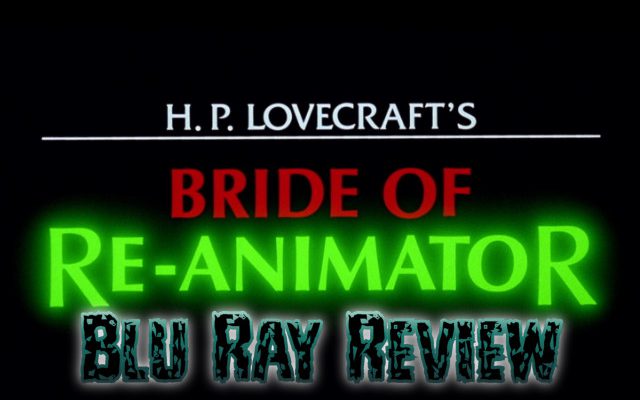 Bride of Re-Animator was made after the enormous success of Re-Animator. With Brian Yuzna stepping into the directors role, can this sequel get close to the deranged brilliance of the original? Read on to find out…

8 months after the mysterious massacre at Miskatonic University Hospital, Drs West and Cain are volunteering in Peru. As a civil war rages around them, they continue their experiments with re-animation. Forced to flee back to the US after their work is discovered, they return to Arkham.

Dr West begins to steal body parts from the morgue, and discovers they can be re-animated independently. Unfortunately for Dr West, a rival, Dr Graves discovers some of his serum, and the head of Dr Hill. Revived, Dr Hill plans revenge on Dr West. Meanwhile, West & Cain have been building their ultimate creation: the perfect woman. As the situation begins to spiral, we head towards the final confrontation between West, Cain, Hill, and the re-animated…

Made 6 years after the original, Bride of Re-Animator was a highly anticipated sequel. With a returning core cast of Jeffrey Coombs, Bruce Abbott, and David Gale, the only thing missing is Barbara Crampton (who refused a cameo on the recommendation of her agent).

The returning cast are all excellent in their roles. The fact they take their roles so seriously adds a level of class to the film often lacking in genre productions. Of course, the real stars of the show are the special effects. Utilising the talents of Screaming Mad George, KNB Effects, and Doublin Effects, the film is a gory, gloopy spectacle.

Incredibly, it manages to top the original in terms of scale and scope. The titular Bride is a truly spectacular creation, being one of the finest creations to ever come out of the KNB workshop. With so much effort put into the effects, the film has to be well shot to maximise their impact. And it is. Yuzna and his crew worked incredibly hard to give the film a high end look. The audio is also pretty good, too (an oft ignored facet of exploitation film production).

Sure, the film has some problems. The script is a touch weak, feeling like they took highlights from the original story and strung them together. But the film is saved by it’s impressive effects, and solid casting.

Arrow Films have put together a wonderful package, as usual. The picture and sound quality are superb, with a crisp HD presentation.

Bride of Re-Animator: Worth Your Money?

Bride Of Re-Animator is a bit of a divisive film. Fans of the original are guaranteed to enjoy themselves watching it. If you didn’t enjoy the original, or you prefer your horror more cerebral and less visceral, then it probably isn’t the film for you.