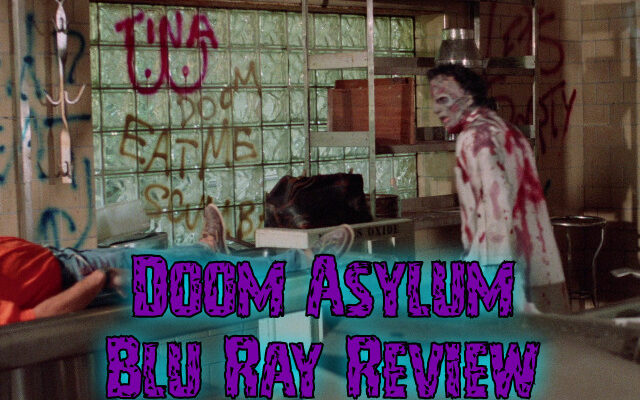 Doom Asylum. Somehow this film avoided me back in the early to mid 90s when I was ravenously consuming every horror film my local rental store had. But what did I miss out on? Is it an unsung classic, or merely yet another low budget gorefest? Well, read on to find out, Fiends…

Doom Asylum sets itself up from the start as a not entirely serious film. The acting is purposefully hammy and over the top. The scenario and characters are deliberately paper thin. And the script is loaded with the cheesiest dialogue imaginable. The characters literally have lines that could only be coming from a written page. There isn’t an ounce of natural cadence to them at all.

And in a weird way, it works. The cheesy atmosphere lends the film an almost breezy air. It doesn’t hurt either, that the film moves along at a rollocking pace, cramming at least 9 grisly deaths into just 79 minutes.

Unlike many similar titles, the film is set in the daytime, which means lots of brightly lit scenes, both indoors and outdoors. For me, this is a bonus, as it gives a different look and feel to the usual dimly lit night time scenarios we are used to in this genre. And it shows just how good the make up is for the films antagonist, The Coroner. Clearly a good chunk of the films budget was spent on designing and creating his look. Yes, you ca tell it’s foam rubber, but I think that’s kind of the point. The gore is passable, albeit fairly brief when compared to other film of it’s ilk.

Yes, the characters do dumb things. But they are supposed to. That is the films raison d’etre. It’s a spoof.

As usual, Arrow have packed the disc with a substantial set of extra material for your pleasure:

And I have to say, the film (apart from the title sequence which only exists on a 4:3 video print) looks superb. Audio is more than passable, too.

Overall, this is a fun little film. Sure, it almost certainly won’t become anyone’s favourite, but is is enjoyable.