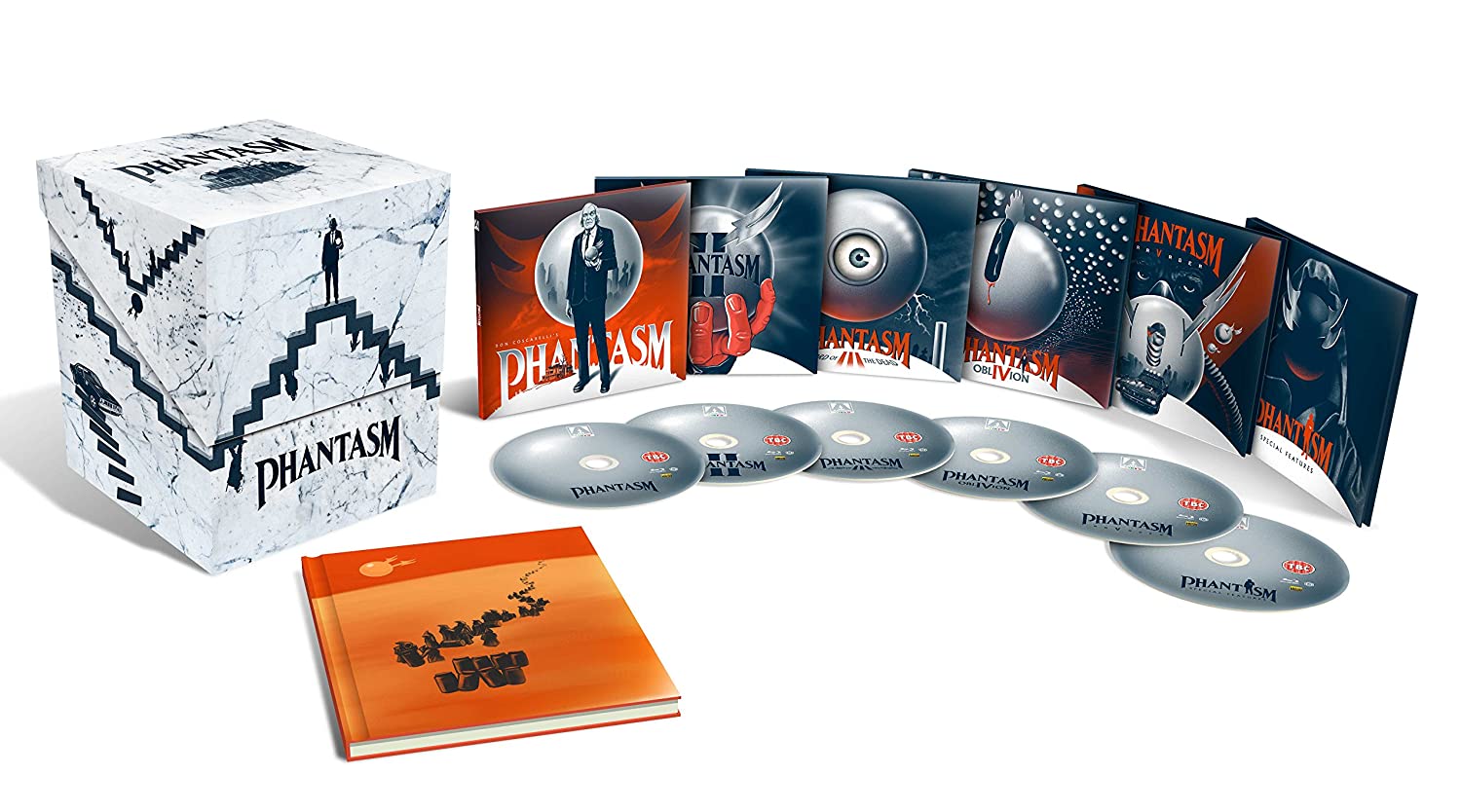 Phantasm is an iconic horror series. From the deadly floating spheres, to Angus Schrimms “Tall Man”, the films have seared nightmare images across the minds of horror fans. And Arrow Films have brought the entire saga together in a box set. And it even features the long in the making Phantasm Ravager (AKA Phantasm V). But is ti worth tracking down and spending your hard earned cash on? Well, read on to find out…

The Phantasm films concern the battle between Mike, his (maybe) dead brother Jody, and their friend Reggie against the world ending schemes of the Tall Man. Armed with an army of dwarfs and his deadly flying spheres, the Tall Man wants to conquer the earth, killing all of humanity. Only our 3 heros know of his plan, and they are determined to stop it. They battle across time and multiple dimensions, uncovering further secrets about each other, and why they are fated to fight.

And that sums up the saga pretty succinctly. Yes, each film dives deeper into the mythos surrounding the Tall Man, and his quest, but at it’s core it is a simple Good vs Evil battle.

The Phantasm films have a dreamlike quality to them. Once the action has begun, you are never quite sure if what you are seeing is the real world, or the Tall Mans nightmare reality. This is it or isn’t it tone keeps you as the viewer somewhat on edge, unsure as to what to believe. And this was very deliberate. The films are presented as a waking nightmare for the protagonists. Peace is rarely found by them, despite all their efforts.

And a lot of this is thanks to Don Coscarellis assured handling of the material. The world of Phantasm is his by design. He wrote the stories, he cast the parts, and he directs the films (well, the first 4, he only co-wrote the fifth). As such, there is a cohesiveness rarely seen in any franchise, much less a horror one. He effortlessly nails the dreamlike feel required, leaving the viewer unsure as to which “reality” they are witnessing. The blurred lines between dreaming and waking are much better handled here than in the more popular Elm St films.

And he is aided in this journey by a cast that has remained largely unchanged throughout. Angus Schrimm, as the Tall Man is an iconic monster for the ages. A grim undertaker in a slightly too small suit, with a malevolent voice, he is a force of nature. Measured, methodical, and menacing, the Tall Man walks through both dreams and reality, seeking to enslave humanity, and fulfill his twisted beliefs. Scrimm contrasts this with the kindly portrayal later in the franchise of the Tall Mans human alter ego. A man who loses his humanity when he discovers interdimensional travel. And up against him are our redoubtable heroes. A troubled teen, his (maybe) dead brother, and their friendly ice-cream man.

Throughout the films, recurrent imagery is presented to us. We see The Tall man moving normally through a world in slow motion. We witness his iconic flying spheres, and their concealed weapons. These motifs only serve to strengthen the series continuity. The films are shown to be linked, not just by title and characters, but by actions. And because of this, we buy into the world of Phantasm. We come to like and root for our heroes.

The films are invariably well presented here by Arrow. Yes, each film varies in quality due to the ever shifting budgets. And yes, Ravager looks exactly like a shot on digital direct to DVD movie. But there is a consistency throughout. This is seen mostly in the cinematography. Coscarelli keeps a consistent feel to the camerawork, to further enhance the films mood. Each film is presented in this set in the best form possible. That means new transfers, and boy do they look good. the original Phantasm has almost certainly never looked better than it does here. There is a clarity that previous releases have sorely lacked. And again, this only serves to draw you in to the dreamscape reality of the film. You can truly sense the otherworldly elements.

Each film has been remastered to an exceptional level. Given the low budget nature of the series, it is frankly criminal how good the films look. When you compare them to previous home media releases, you can’t help but be impressed. Most fans will be familiar with either the badly panned & scanned VHS versions, or the quick & dirty DVD releases. It is clear that this set is something different.

The audio is as good as you can expect, with each film sounding far better than I can ever remember.

The Phantasm box set is absolutely jam packed with extra features, living up to the high standards Arrow have previously set themselves.

• Optional English subtitles for the deaf and hard of hearing for all films.

• The Los Angeles Premiere Experience. Join the audience of die-hard phans as they experience the restored classic for the first time! Watch the entire feature with a 5.1 Surround audience track recorded at the 2016 Los Angeles premiere followed by the full Phantasm Q&A panel.

• Reflections of Fear: Realising Phantasm. In this brand new pheaturette, experience new stories about the people and personal inspiration behind Phantasm, and learn how the film’s success has impacted on the actors and filmmakers’ lives. Features interviews with Don Coscarelli, actors A. Michael Baldwin, Reggie Bannister, Kathy Lester and Ravager director David Hartman.

• Q&A panel from the 2016 Austin Premiere of Phantasm: Remastered.

• Phantasm: Actors Having a Ball. Phantasm cast and crew offer up various recollections from the making of the film.

• Reflections of Fear: Realising Phantasm II. In this brand new pheaturette, learn from the cast and crew how and why a Phantasm sequel happened, the evolution of the story, and the introduction of the most iconic props in the series. Features interviews with Don Coscarelli, Reggie Bannister, A. Michael Baldwin, special make-up artists Mark Shostrom and Dean Gates and Ravager director David Hartman.

• The Ball is Back. Archive making-of documentary featuring interviews with Don Coscarelli, Angus Scrimm, Reggie Bannister and others.

• The Gory Days. FX artist Greg Nicotero looks back at his work on Phantasm II.

• Audio commentary with actors A. Michael Baldwin and Angus Scrimm.

• Reflections of Fear: Realising Phantasm III. In this brand new pheaturette, the cast and crew reflect on the third chapter in the Phantasm series and the vast amount of make-up work on the film. Features interviews actor A. Michael Baldwin, Ravager director David Hartman and make-up artists Mark Shostrom and Dean Gates.

• The Los Angeles Premiere Experience. Join the audience of die-hard phans as they experience Phantasm: Ravager for the first time! Watch the entire feature with a 5.1 Surround audience track recorded at the 2016 Los Angeles premiere.

• Phantasm and You – a light-hearted recap of the Phantasm franchise by David Hartman.

If you can manage to find the Limited Edition set you also get an entire extra bonus disc:

Plus a specially written booklet.

If you enjoy the Phantasm films, then why don’t you already own this? This is indeed the most essential version of the franchise. It is more than worth your time and money. Buy it. Buy it now!