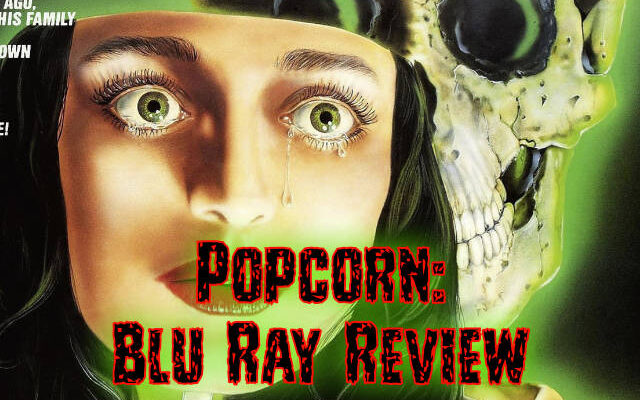 Popcorn is a late period entry in the slasher boom of the 1980s & early 90s. Eschewing the over the top gore that had become the genres calling card, Popcorn instead took a more spoofy angle. But is it any good? Well, read on to find out…

15 years ago Lanyard Gates, a deranged cult leader, murdered his family live on stage. He filmed the event, but was believed killed in a mysterious fire that destroyed the theatre he had committed the murders in.

Now, a deranged killer, and master of disguise, is intent on finishing Lanyards film, and killing the remaining survivors of that terrible night. Will he succeed? Or will his plot be foiled?

And that’s it really. Like many slasher films, the plot is wafer thin, but has enough meat to it to just about hold together. Yes, it isn’t high brow, but it is enough to keep the story moving forwards.

Popcorn does a pretty good job of taking the tropes of the slasher film, and skewing them just enough to not be an entirely serious take on the genre. The films central conceit of an all night horror film festival is brilliant, allowing the filmmakers to indulge in some fake “William Castle” style trickery. We get giant sized props, seat buzzers, and some truly terrible “acting” in the film within a film segments.

As you would expect, most of the films victims are excitable “teenagers”. Naturally, you are supposed to feel some empathy for them. And on the whole they do come across as a likeable bunch of characters overall. Even the films antagonist isn’t totally despicable, well, until the final act anyway. And the concept that they can perfectly mimic anyone else does make it a bit of a mystery as to who the killer is.

Visually, the film belies it’s somewhat low budget origins very well. This is probably to do with the fact that the films cinematographer was Ronnie Taylor, best known for his work on the Oscar winning epic Ghandi! Despite taking place in largely low light environments, the film doesn’t have that overly grainy look associated with many slasher films of the same era. Sound is pretty good, too.

The effects are sparingly used, but overall are pretty good. As I mentioned earlier, this isn’t a gory film, being more reliant on atmosphere and story. The blu ray presentation does show a few more “flaws” in the make up than many would probably like, but it isn’t distracting in any meaningful manner.

So, that isn’t a bad set of extras for such a “minor” film. The quality of them all is excellent, too.

Popcorn is a fun little film. If you love slasher films, and have a soft spot for the history of “horror”, then you will get an awful lot of enjoyment here. The extras are very well presented, and the overall package is superb.