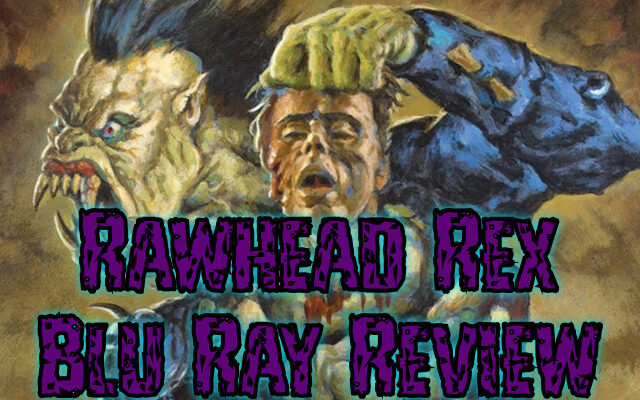 Rawhead Rex was the 2nd time a Clive Barker story had reached the silver screen. Scripted by Barker himself, is this mid 1980s romp worthy of your attention? Or is it a waste of digital space? Read on, dear Fiend, to find out…

Adapted for the screen by acclaimed horror writer Clive Barker (Hellraiser, Nightbreed) from his short story of the same name, Rawhead Rex sees a hulking, ancient demon tearing a bloody swathe across the Irish countryside.

When an unsuspecting farmer pulls up a stone column embedded in a barren field, he accidentally unleashes hell by freeing Rawhead Rex – a hulking monster that has been trapped there for thousands of years. With the seemingly unstoppable demon rampaging through the local village, American historian Howard Hallenbeck is faced with the task of putting Rawhead back in the ground for good.

So, Rawhead Rex is in essence a monster movie, set in then modern day Ireland. Monster movies were a bit passe in the age of the slasher film, although there were a few that got made (Pumpkinhead, Critters, Swamp Thing). As such, the film has very different feel to many of it’s contemporaries.

Without doubt, Rawhead Rex is a flawed film. The titular creature looks fairly impressive in stills, but when in action, it becomes the films biggest liability. The story itself is strong enough. A pre Christian god reborn and going on a rampage to reclaim its dominion. You get plenty of Barkers knowing perversity (such as Rawhead baptising a Verger by urinating on him), and a modicum of gore. But thanks to the clearly lacking budget, it never quite comes together as a satisfying whole.

The actors acquit themselves well enough, even the children. And some of the effects work is bloody good. But Rawhead himself disappoints. The animatronics that control the facial expressions are barely above Thunderbirds levels of sophistication, so he looks like exactly what he is: A man in a suit and mask. The film also features the most gratuitous boob shot I can recall seeing in any horror film.

Despite the films somewhat questionable quality, Arrow once again have done an outstanding job with the disc. The extras are as follows:

Now, I will say that the film looks by far the best it ever has. Despite the low budget and dull location weather during the shoot, it holds up remarkably well. It is clear that every single penny of the films meagre budget is on screen.

Rawhead Rex is a flawed, but enjoyable film. Arrow have produced a superior package here, probably more than the film deserves. If you like cheesy monster movies, Clive Barker, or 1980s post Hammer British horror, you’ll certainly get your moneys worth here.