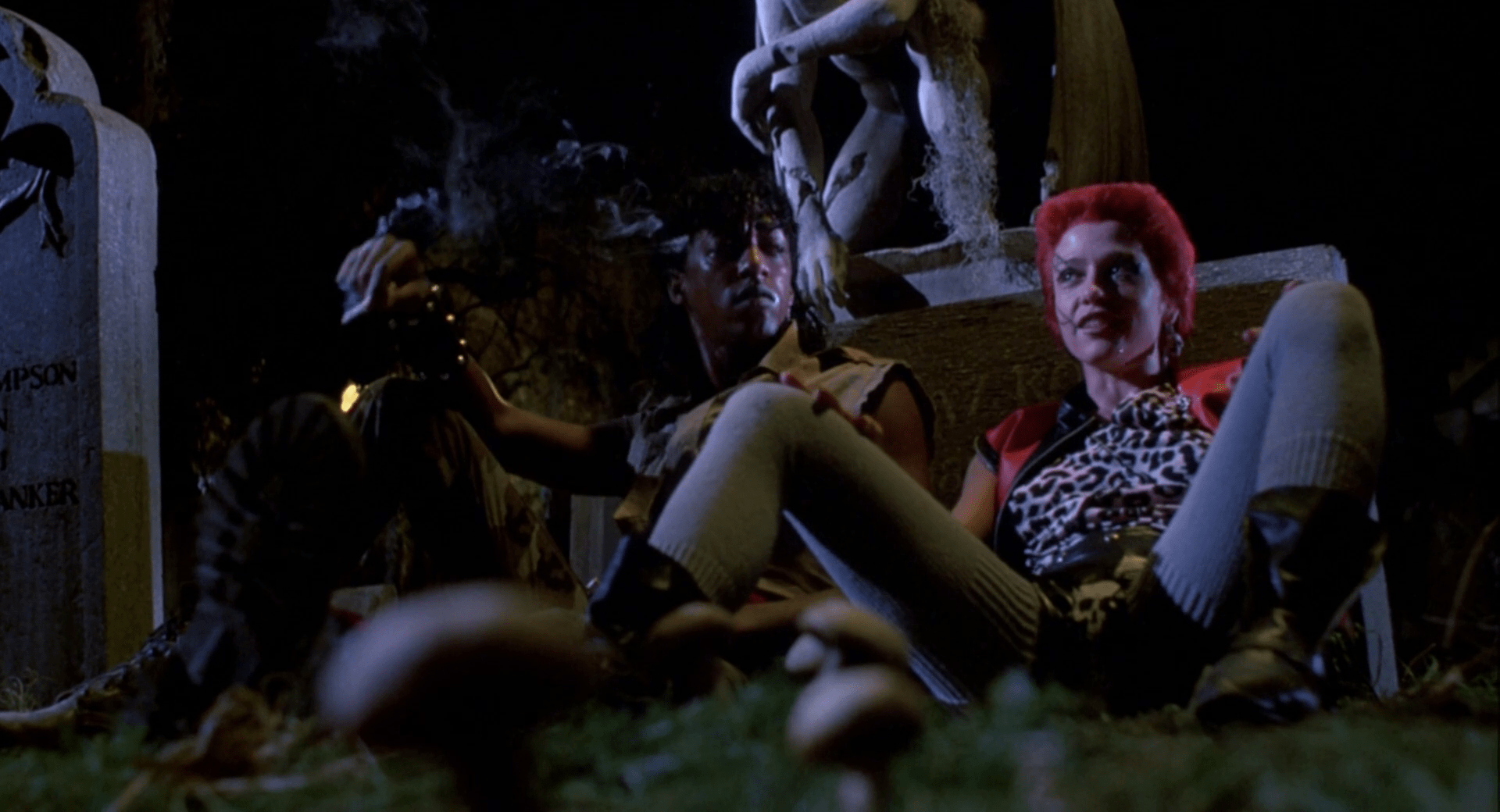 I’ve wanted to do a RoTLD print comparison for ages. Having finally managed to retrieve for myself a fresh copy of the long out of print Tartan DVD edition of the original Return of The Living Dead, I can finally do the comparison between the transfers used in this version and the later MGM issued Special Edition DVDs. The Blu Ray release appears to be a 1080p scan of the existing remastered print used for the previous “Collectors Edition” DVDs. I have added some screengrabs to illustrate this.

This is a pretty dark sequence, having been shot on location at night. First up, Trash and Meat sat by a tombstone:

As you can see, the MGM edition is significantly lighter, showing far more detail. Also, the image framing give the shot more peripheral details, such as the tombstone on the left hand side. The Bu Ray release is identical, just at full HD resolution.

Drastic difference to the picture quality here. The original 2001 release shows a very heavy “red” tinge, which has been corrected on the 2007 release, showing the tomb on which Trash is stood to be grey marble. Much more background detail is once again visible, as is the peripheral detailing.

Yet again, the amount of extra detail present in the MGM disc is startling. More peripheral detail again, but a noticeable cropping of the bottom of the frame.

So, the difference between the 2 versions is significant to say the least. Tartan appear to have used the same full frame 4:3 master they had previously used for VHS release in the UK, and it shows when compared to the later MGM release. At the time, however, the Tartan DVD was probably the best most folks had seen the film look, unless they had been fortunate enough to see the original cinema release. I will also note that the Tartan DVD seems to be from 4:3 “open matte” print, which focuses on the centre of the original 35mm frame, revealing extra detail at the top & bottom of the frame, but cuts detail from the left & right hand sides.

I recently saw RoTLD on the big screen in an original 1985 35mm print from Tartan. This confirms that the print used for the 2001 DVD release was an open matte version, as the 35mm print shared the same colour and darkness profile. The only difference (print damage excluded) was that the 35mm print was matted to approx 1.78:1 widescreen.