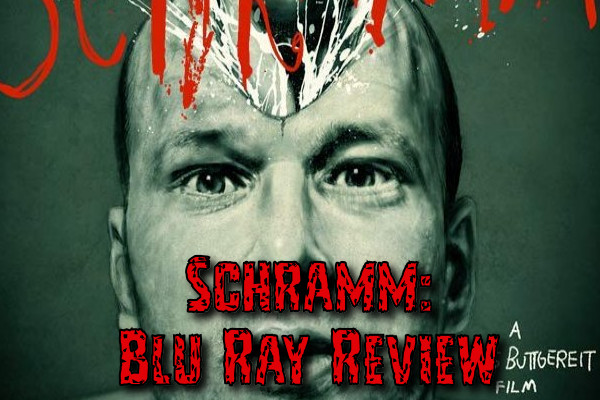 Schramm has finally arrived in the UK officially. Fully certified by the BBFC, and completely uncut, is this oft spoken of underground feature truly worthy of the treatment given to it by Arrow Video, or is it a case of the legend far outweighs the reality?

Lothar Schramm is a taxi driver. He drives people around and lives alone in his small flat. Schramm is also a serial killer and sexual pervert. He strikes up a curious friendship with his beautiful neighbour. She happens to work as a prostitute, and he begins to ferry her too and from her clients. At the same time he brutally murders 2 Jehovah’s Witnesses who pay him a visit. He then then nails his penis to a board in some kind of penance. After this, he decides to whitewash his flat and cover up the evidence of his crime. Whilst doing this, he falls from the ladder and breaks his neck. As he lays dying on the floor in a pool of whitewash, we flashback through these events. And we see what fate his actions have inadvertently set for his neighbour.

Schramm maintains it’s director, Jorg Buttgeriets distinctly experimentl and arthouse approach to horror. The film is hallucinatory at times, moving back and forth along the liner timeframe of the story. This is in many ways the perfect way to get “into the mind of a serial killer” as the films publicity proclaimed. Schramm is a broken, unbalanced man, and the film reflects this all too well. It touches on various facets if Schramms psyche, with elements of his frustrated sexuality being often to the fore.

As well as killing the visitors, he arranges their nude corpses into various sexual positions, after which he nails his penis to a board. Upon hearing his prostitute neighbour (whom he seems to be fixated on in a non-violent manner), he has sex with a blow up torso. And ultimately he has the contact with his neighbour which his brain desires, albeit only after drugging her into unconsciousness.

The film depicts his actions in a very matter of fact way. Unlike, say, The New York Ripper there is no attempt to put a movie like sheen onto the sleaze and grime. Schramm exists in a dirty, shabby world, and commits dirty, shabby acts. The gritty, grainy 16mm photography works brilliantly in this respect. And Buttgereit is his usual resourceful self, creating some truly stunning shots.

It is also very well acted. Florian Koerner von Gustorf lends a believable are of menace and patheticness to Schramm. And Monika M is her usual, icy yet sexual self.

Schramm isn’t a film for everyone. It is grimy and bleak. It is pretty upfront with it’s depictions of somewhat less than normal behaviour. Yet it is also a brilliant piece of art.

Arrows wonderful collector’s edition Blu Ray set marks another high point in their oeuvre. The film comes packaged in a sturdy slipcase. You get a fully remastered copy of the film, commentary tracks by Buttgeriet and others involved in the films production. A Q&A session, an animated short film sequel, a making of documentary, and a number of featurettes about various aspects of the films production. There are also some short films from the makers thrown in for good measure.

A cd of the soundtrack is also included, as is a lovely 60 book featuring an all new essay on the film, and an interview with Buttgereit.