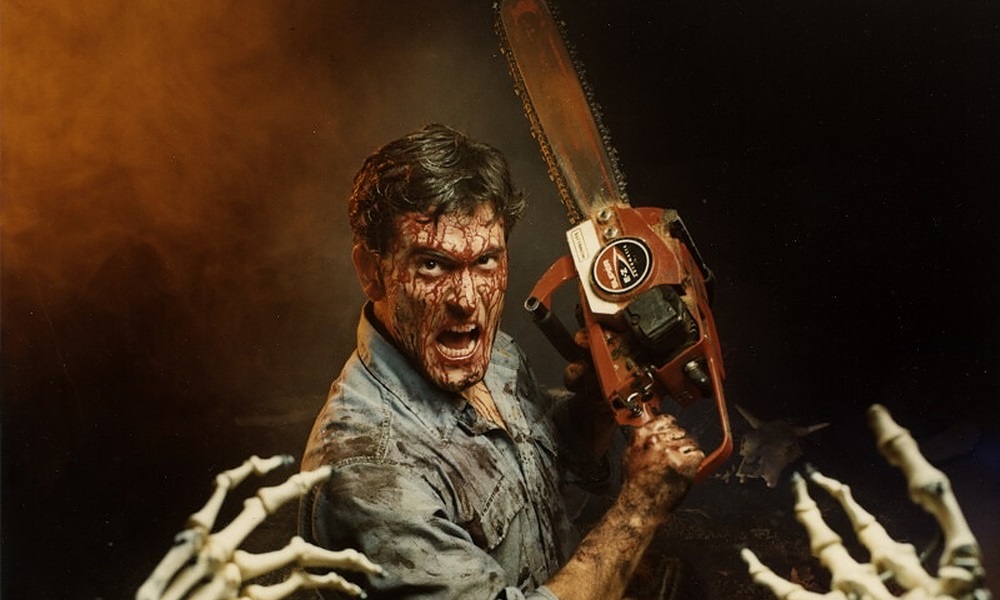 Yes, seminal low budget horror film The Evil Dead is now available to watch in 4k UHD! The Evil Dead 4k UHD? Surely the film was so cheaply made that a 4k presentation doesn’t add anything? In fact, doesn’t the increased resolution show up the films flaws even more than before? Well, read on to find out what the truth is, Fiends…

So, I’m going to assume that at least some of you fine folk reading this have somehow not seen this film yet. As such, here is a synopsis of the plot:

Five college students travel to a remote cabin in the woods and unwittingly unleash a monstrous evil force hellbent on their total destruction.

That’s it. That’s all you need to know. The film isn’t any deeper than that. The plot is about as basic as it gets for a supernatural cabin in the woods horror film. Indeed, The Evil Dead is quite possibly the archetypal film of this style. A small cast, a remote location, and a lot of darkness. Hell, “The Cabin In The Woods” is just a great big homage to The Evil Dead, even if it does get much deeper with it’s plotting.

Well, what more can be said about this film that hasn’t been said already? Made for barely $500,000 (some reports say just $350,000), The Evil Dead showed exactly what was possible in low budget film making. The film makes a virtue of it’s limited locations, and small cast, being filled with a barely contained energy. It is apparent right from the first shots that the makers were not going to let a lack of funds stand in the way of being as creative as they possibly could. We have home made “Steadicam” shots (known as “Shaky-Cam” to the crew), disorientating camera angles, and a mise-en-scene that is truly creepy.

Director Sam Raimi announced his not inconsiderable talents with his debut film. The camera work is dynamic and innovative. His scripting is tight and wastes nothing. And his energy and love for film just oozes from each frame. Yes, the acting may be a bit rough. And the effects work is definitely towards the amatuer end of the spectrum. But the film pulses with an anarchic energy that carries it past it’s flaws, and into rarified territory.

And given the films ultra low budget origins, it looks pretty darned good in 4k. Sure, there is some softness to be seen, and a fair amount of grain too. But don’t forget this film was shot on some pretty basic 16mm equipment & stock. In fact, this is probably the best the film has ever looked since it’s original release. And it is presented in the correct 4:3 fullscreen ratio. Be aware that the included 1080p blu ray is the previously released version, featuring the familiar 1.85:1 cropped version of the film.

The UHD disc only contains the film. All of the extras listed below are on the standard 1080p blu ray included:

One By One We Will Take You: The Untold Saga of The Evil Dead – Comprehensive making of documentary.

Treasures from the Cutting Room Floor.

Picture-in-Picture: Join us! The Undying Legacy of The Evil Dead – Various horror directors discuss the film.

The Evil Dead: The Verdict:

The Evil Dead is an essential film for all horror fans. It introduced the world not only to director Sam Raimi, but also cult icon Bruce Campbell. And for those reasons alone, it’s a worthy film. The fact that it is also highly enjoyable is just the icing on the cake.

(Please note, there is no gallery for this release, as I have no way of capturing 4k UHD screenshots).