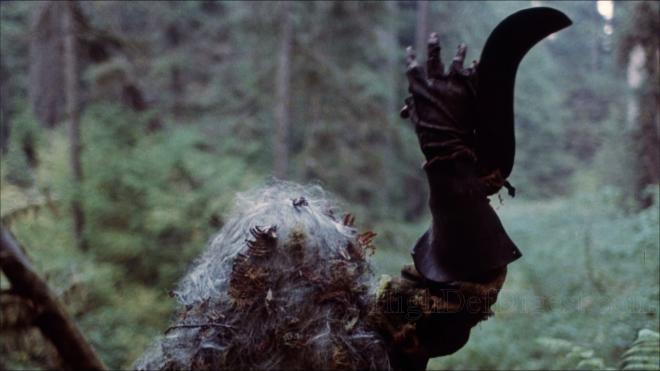 The Final Terror is a slice of barely remembered early 80s horror. It is probably most notable for featuring a young Daryl Hannah, Joe Pantoliano, Rachael Ward, Adrian Zmed, and Mark Metcalf. Often called a slasher film, it actually has closer ties to “Deliverance”, or “The Hills Have Eyes” than “Halloween”. But is it any good, I hear you cry? Well, why don’t you just read on to find out…

A group of young campers out for what they hope will be a fun-filled weekend find their plans spoiled by a disguised, merciless killer who stalks the forest in search of new victims. Soon They are caught in a terrifying web of bloodshed and murder. It is up to the remaining few to defend themselves and put an end to the terror-filled weekend.

So, that’s the gist of it. We have what seems on the surface to be a standard slasher set up: young people, deep in the woods, being stalked by a deranged killer. Except unlike most other horror films of the time, there are barely any onscreen deaths. 3 in fact. And a couple of off screen ones. Most of the film instead pushes the atmosphere, building the characters and their increasingly dire situation to a peak.

Being set deep in the woods, and partially on a river really gives the film a “Deliverance” vibe. Sure, you get the slasher staple pre credits kill, and campfire scare story scene. But you also get a crazy local with a clear secret. Oh, and some great shots of the forest.

For the majority of it’s slim run time, The Final Terror doesn’t “do” the tropes of a slasher film. You don’t get the regular as clockwork murders. You don’t get the roving POV shots from the killer. Indeed, the majority of the cast actually survive, so no “final girl here. Instead, the film mines the backwoods terror vibe of “Deliverance”, and ultimately “The Hills Have Eyes”. Clearly, the “Deliverance” aspect comes from the deep in the backwoods territory setting, replete with crudely built shacks, and heavily accented locals. But the films twist in the final scene bring the whole “The Hills Have Eyes” vibe into focus (can you say crazy family killers?).

And despite the films clear lack of budget, which almost certainly accounted for the lack of kills and effects, it does a damn fine job of creeping you out. The forest is at once vast, and claustrophobic. The way the killer uses camouflage to move unseen is disturbing, as you are never quite sure if they are in the shot or not.

And the acting is surprisingly good. Despite being mostly unknown (except for Mark Metcalf, fresh off of National Lampoons Animal House), they all acquit themsleves well. Joe Pantoliano Puts in a effectively creepy turn as hillbilly bus driver Eggers, and the fresh faced Daryl Hannah does well enough in her greatly underwritten role as Windy. Adrian Zmed was a rising star, having recently appeared in Grease 2, and does quite well here. And the rest of the cast are more than good enough. I would even venture they are probably better than a film of this budget deserves.

The effects, while only shown briefly, are more than  acceptable refraining from the usually O.T.T. nature seen in similar pictures. And the score does the job. Yes, there are a few nitpicks, such as the films night scenes being almost too dark to see anything in. And it is clear that the pre credits scene was added on as it feels very different to the rest of the film. But beyond this, The Final Terror is a surprisingly enjoyable little film.

Well, i have to say, I went into The Final Terror with few expectations. And I finished it being really very impressed indeed. Overall, I would heartily recommend this film to fans of early 80s horror movies looking for something a bit different to the usual “Halloween” knock offs.