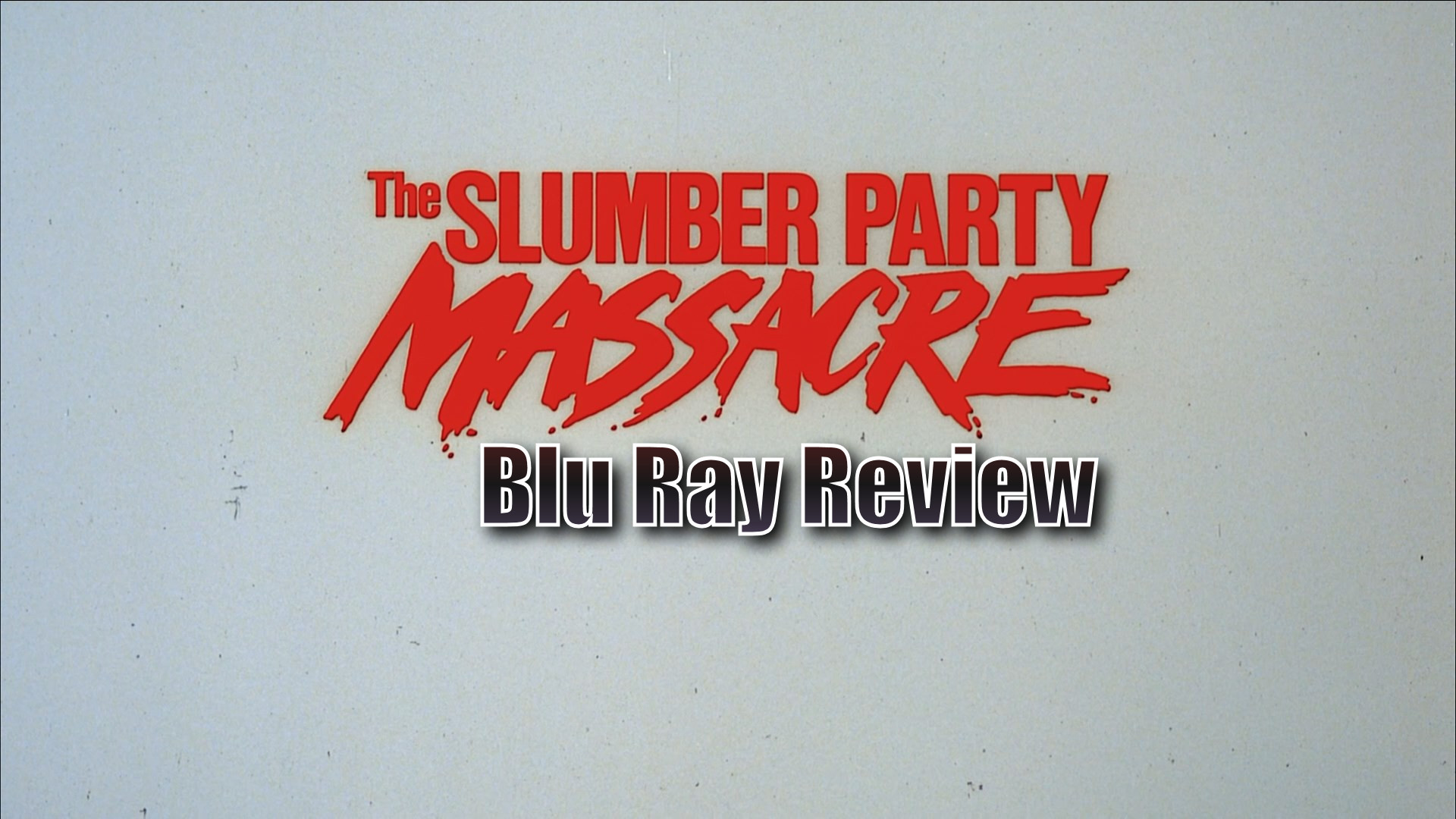 The Slumber Party Massacre is a cult classic entry into the 1980s slasher movie genre. Unusually for a slasher movie though, The Slumber Party Massacre is written, produced, and directed by women! Yes, this sub genre often seen as being super misogynistic has one of it’s most well loved entries made by members of the female gender. But does this change how the film works? Does it fill the screen with near naked men instead doff women? Does it try for a subtext? Well, read on to find out….

Yeah, that pretty much sums the plot up. Oh, you want some more detail? Trust me, you don’t need it. The films plot really is as simple as “escaped psycho killer stalks teenage girls at a slumber party. Oh, he uses an insanely phallic drill as his weapon of choice.” Now, the film was originally conceived as a parody of the genre, but was shot as a supposedly “straight” slasher. However, it is apparent that the director saw the parody within, and the film maintains a comedic edge throughout. The sheer basic-ness of the plot indicates the film isn’t entirely serious when you think about it. Slasher films were often derided for having wafer thin plots, so this one has a plot so thin you can see daylight through it.

The Slumber Party Massacre really is an odd one out in the genre. The script was written by feminist author & activist Rita Mae Brown as a parody of the genre. The films producers tried to “serious” it up, but the films director, Amy Holden Jones kept a comic edge to the proceedings throughout anyway. And it works in the films advantage. All the usual misogynistic tropes are present & correct: gratuitous nudity, smoking drugs, drinking, a killer with a phallic weapon. But they hang together with a knowing wink at the audience. This film knows the path it is on is a well trodden one, and it makes sure to hit all the marks bang on. For scream queen fans, Brinke Stevens makes an early appearance as one of the killers victims during the early part of the film.

There are plenty of genre standards to be seen. Fake out jump scares, POV shots, characters doing the dumbest things imaginable given the situation. You name it, it’s here. And it’s all done incredibly well.

The film is fairly well shot, too, given it’s meagre $220k budget. The camera work is good. The film is very well edited (as it should be. The director was also a film editor), and flows nicely across it’s 77 minute run time. Yes, there is a lot of grain present, but that is to be expected from a film of this vintage and budget. And yes, there is a bit of damage to the print, but it still looks far better than any other home release has ever done. The sound is more than acceptable, being a nicely done DTS Master Audio mono track.

I’m looking at the 2014 blu ray from Scream Factory here. There is a 2020 re-issue with some more extra features, but I’m concentrating on this discs set:

So, not a huge selection, but a solid one nonetheless. And given the shoddy treatment the film has received in the past, it’s a massive improvement over those releases of The Slumber Party Massacre, I can assure you.

The Slumber Party Massacre: The Verdict:

The Slumber Party Massacre isn’t the greatest slasher film ever made. But neither is it the worst. Indeed, I would say it is a bloody enjoyable film, and I would heartily recommend it to any discerning horror fan.