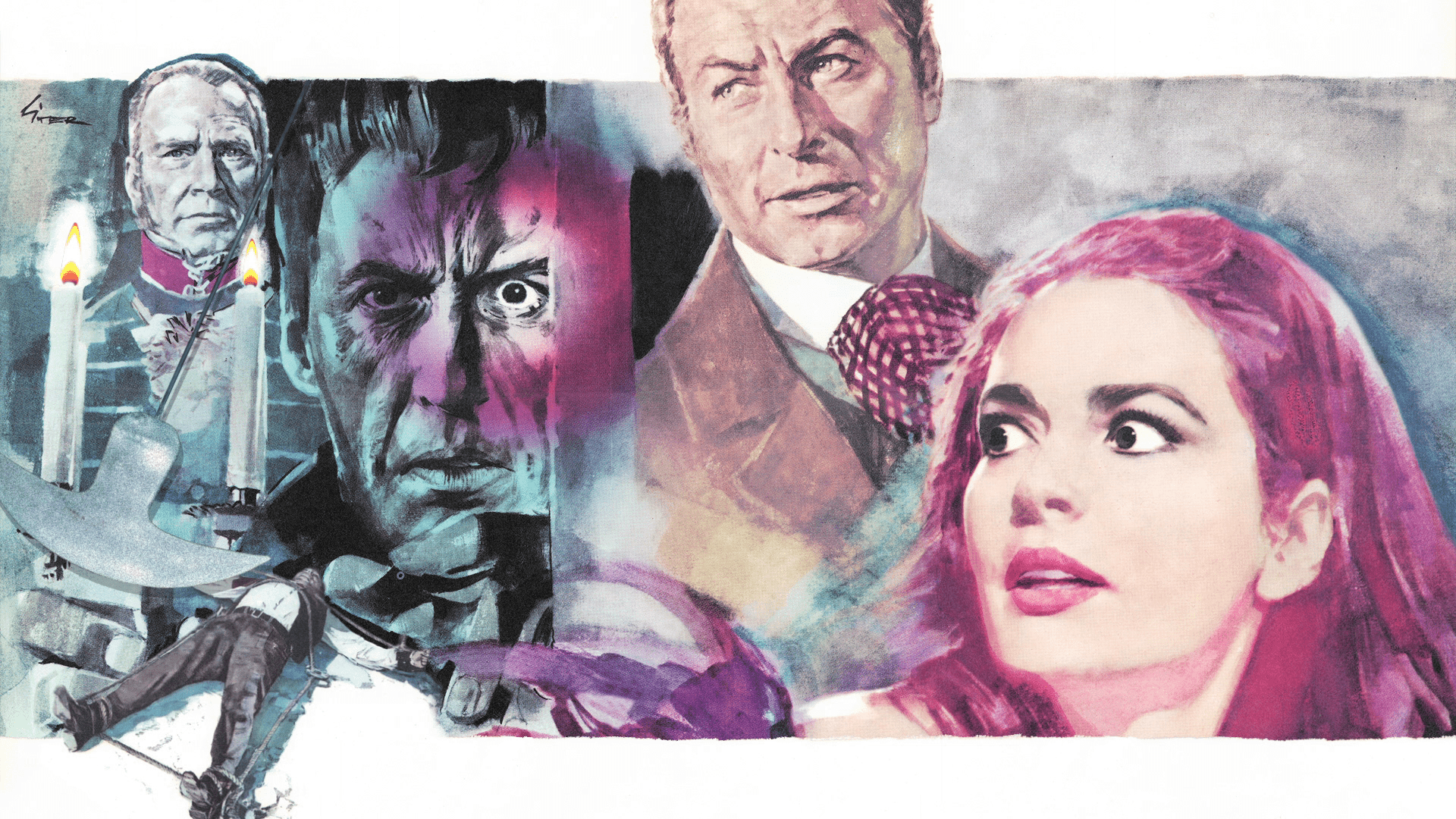 The Torture Chamber of Dr Sadism. Just trips off the tongue, doesn’t it? As a film title it grabs you immediately. You wonder what aberrant atrocities this piece of celluloid will show you. Well, if you read on, Fiends, you will certainly find out.

In the Olden Tymes, Count Regula is drawn and quartered for killing twelve virgins in his dungeon torture chamber. Thirty-five years later, he comes back to seek revenge on the daughter of his intended thirteenth victim and the son of his prosecutor in order to attain immortal life.

So, the plot is a fairly straightforward one. As with many other Gothic Horrors of the period, the full plot borrows liberally from literary sources. In the case of The Torture Chamber of Dr Sadism, it’s original German title gives away where the film took it’s influence mostly from. You see the German title is “Die Schlangengrube und das Pende“, which translates as “The Snake Pit and the Pendulum”. So the story is loosely based around Edgar Alan Poe’s iconic Gothic tale “The Pit & The Pendulum”. Indeed, a pendulum is featured prominently in the films latter stages, as is a snake pit (albeit much more briefly).

Made in 1967, TTCODS is a part of the Eurohorror gothic cycle. Many films were made in this style, which aped the look and feel of the highly successful Hammer Horror film coming out of the UK, and the Roger Corman Poe adaptations from the USA. Indeed, this film features Hammer icon Christopher Lee as the villain Count Regula. Like many other British and American genre stars, Lee often appeared in European made films to keep himself working.

As a film, it is remarkably well made given the clear budgetary limitations. The cast is small, and the locations are limited. Yet it manages to seem far more expansive and grand than it clearly is. And this is mostly down to the films wonderfully done production design. One advantage of shooting in Germany was that there are plenty of mediaeval villages still in existence, lending an air of authenticity to the films location work. And the interior sets once we reach the Counts castle are truly superb. Surrealistic, with elements of Heironymous Bosch thrown in, the titular chamber is a gothic delight.

But for me, the star of the production is the truly surreal forests. Swathed in mist, and bedecked with broken and hanging corpses, they are truly unique. They help create an almost dreamlike atmosphere as our characters approach the castle.  All of this is aided by the truly bizarre euro-jazz styled score. It shouldn’t work, yet it somehow does, fitting perfectly the mood of the film.

The acting is, well, passable. Lee almost sleepwalks through a role that requires little more from him than looking menacing and ghoulish. This was clearly a minimal effort film on his part. Acting honours go to the films heroic lead, Lex Barker, however. Whilst not an truly great performance, he has enough gravitas and believability to keep you watching. The remainder of the small cast are all clearly re-dubbed European actors, although this doesn’t detract from their passable performances. The female lead Karin Dor has little to do beyond look pretty, and scream a fair bit whilst running around.

This copy of the film is the mediabook edition released in Germany by M Square Classics. You do get 2 discs in the set, one Blu-ray copy, and another on DVD, plus written materials. Naturally, these are all in German, but Google Translate can be your friend here. the extras are as follows:

And it all looks surprisingly good, given its background. Shown here in 1.66:1 ratio, which as far as I can see is how it was shot, the film looks surprisingly good. The colours are as vivid and eye-catching as you would expect from a Hammer styled Gothic. The audio is decent, with a fairly good stereo mix. And the extras are reasonable.

The Torture Chamber of Dr Sadism (or The Blood Demon if you are one of my American readers) is an enjoyably surreal romp through some Euro styled Gothic insanity. Sure, it isn’t as good as most of the Hammers, nor the Cormans, but it is still right up there at the top of the “2nd tier” of the Gothic film cycle.  Plus, this German set is region free, so everyone can enjoy it, no matter where they are.