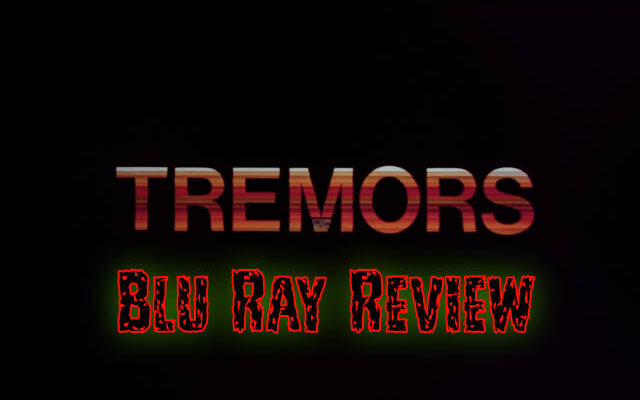 Tremors is one of my all time favourite comedy/horror films. It takes the 1950s monster movie, and adds a 1980s angle to it. A failure at the box office originally, Tremors went on to become a much loved home video hit. But is it worth the lavish treatment it has received from Arrow? Well, read on and find out…

Good-ol’-boy handymen Val (Kevin Bacon) and Earl (Fred Ward) are sick of their dead-end jobs in one-horse desert town Perfection, Nevada (population: 14). Just as they’re about to escape Perfection forever, however, things start to get really weird: half-eaten corpses litter the road out of town; the phone lines stop working; and a plucky young scientist shows evidence of unusually strong seismic activity in the area. Something is coming for the citizens of Perfection… and it’s under the goddamn ground!

So, that’s the story encapsulated nicely. The plot is as simple as these films get (monster appears, attacks people, they fight back), but it works beautifully. The makers waste little time with any complicated set up, and get the audience up to speed pretty quickly. There is no superfluous exposition or diversions. Once the action begins in Tremors, it doesn’t let up for a minute.

Being a 1980s take on 1950s monster movie tropes, Tremors actually feels quite fresh. Apart from Jaws and a few low rent knock offs, monster movies had been a largely ignored sub genre for years when Tremors came along. The films true masterstroke is in it’s cast of characters. Everyone in the film is just an ordinary person. Even the token scientist is just a student seismologist, not a fancy professor. And the residents of Perfection are a wonderful cross section of American society. You have the immigrant striving to achieve the American Dream, the artist wanting to be free, the survivalists who just want to be left alone. And the you have our central pair: Val and Earl.

Val and Earl are a classic “odd couple” pairing of an older, more cynical man, and his young, brash accomplice. Both stuck in Perfection they long for a way out, and just as they find one, it is taken away from them by those pesky Graboids.

The films other highlight is the character of Burt Gummer. Burt is a take on the classical American survivalist. With the Communist paranoia of the 70s & 80s still rampant, Burt is prepping his home in the desert for a war he feels is inevitable. Seen as a bit of a kook by the other residents, it is partly due to his arsenal of weaponry that the Graboids can be successfully fought. Indeed, Burt was such a popular character that he is the only one to have appeared in all the sequels (and the solitary prequel).

Also, the films creature effects are superb. A mix of large scale animatronics, and puppetry, the Graboids look as real as possible. There is a texture and life to them that CG just can not replicate, no matter how much it tries.

Arrow have really gone to town with this exhaustive limited edition release:

There is just so much content here. The behind the scenes material really shows just how much those involved loved the film. Everyone interviewed seems happy to be there, talking about a cherished experience. And the raft of other bonuses are superb. The booklet is brilliantly written, and the artwork extras are stunning. Arrow have once more produced a definitive set to bring the film out in.

Well, what can I say? Tremors is not only an absolutely fantastic film, but Arrow have produced an outstanding set. The film looks incredible, far better than a film of it’s budget should in fact. The audio is superb, and the whole package is just sublime.

This is a guaranteed 5/5 Fiends.