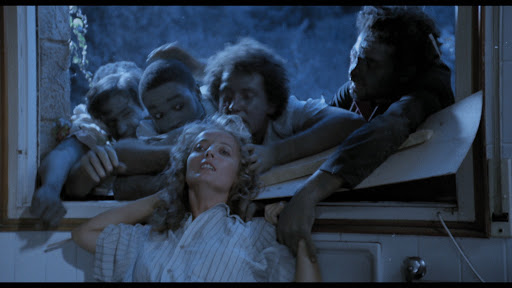 Zombie Creeping Flesh is yet another entry into the Italian “Dawn Of The Dead” rip-off genre. And much like many of it’s peers, it focuses more on the gleefully presented gut munching rather than it’s progenitors politics. Although, that isn’t to say the film doesn’t aim for a more noble objective. There is some politics within, as you will see later on.

You may be more familiar with this film under one of it’s many alternate titles: Virus, Hell Of The Living Dead, Zombi 4, etc.

But is it worth spending your hard earned cash on? Or is Zombie Flesh Eaters about as entertaining as a month old corpse? Read on to find out…

After an experiment gone wrong, a virus that turns people into zombies spreads throughout New Guinea, whilst a female reporter and her cameraman and a team of four commandos sent to investigate try to survive the onslaught.

Now, that summary doesn’t do the slightly bonkers plot any real justice. The films subtext deals with the treatment of the Third World, and how they will one day “consume” the West, should we keep mistreating them. of course, as already stated, this is hidden behind a welter of cheap gore effects, and gratuitous nudity.

Overall, the plot actually makes more sense than it’s far more celebrated peer, Zombie Flesh Eaters. Eschewing any supernatural aspects of zombie lore, it keeps its feet firmly in the “scientific” realm. These are most certainly man made zombies, and the script lets you know this. Sure, the moralising is typically heavy handed when it rears it’s head, but that’s to be expected. Director Bruno Mattei wasn’t exactly renown for his subtlety or guile.

That isn’t to say he doesn’t do a good job here. The film hits all the right beats, and maintains a reasonable pace. The gore is handled with aplomb, never hitting the excessive heights of some similar titles, yet being substantial enough to appease all bar the most bloodthirsty fan. Hell, we even get the little used trope of the zombie kid that no one wants to shoot initially. And we get a zombified priest. So that’s 2 cultural taboos. In the same scenes, no less.

As stated earlier, the film also features some gratuitous nudity, which was pretty much par for the course in Italian exploitation films. The excuse this time around is the female reporter needs to introduce our heroes to a native tribe she lived with. And of course, this means she needs to disrobe because, well, they are “savages” and don’t “do” clothing. At least that’s a better reason than the nude scuba diving in Zombie Flesh Eaters (which gives no reason at all. It just happens).

Given the painfully low budget, Mattei produced a pretty decent looking film. Shot predominantly in Spain, despite being set in New Guinea, the film has a warm, bright look to it. Audio is as good as can be expected from an Italian film of this vintage. The dubbing is atrocious as always, but the music is surprisingly good (mostly because it’s recycled tracks from other film scores by the legendary Goblin, including their Dawn Of The Dead one).

Overall, this is a fun little film for fans of cheap Italian exploitation.

Next post Disco Balls To The Wall: Tragedy (Album Review)